Join the waitlist to be emailed when this product becomes available

This Greek Xiphos possesses a tempered and sharpened blade of 420 stainless steel. The grip of carved and polished hardwood is dual-pinned to the thick blade tang. The pommel is also wood and is capped on its end with a steel disc. The sword comes with a stitched leather scabbard with an integrated riveted belt loop.

This replica Xiphos is a practical sword purpose-built for those who wish to appreciate its time-tested design first-hand or the reenactor or collector who desires a battle-ready replica that is not overly heavy.

The blade is crafted from strong, quality steel paired with a robust hilt construction. In terms of handling this Xiphos is quite easy to wield and is an agile, responsive weapon. The ancient leaf blade design accentuates the force of cuts and chops, whilst the wide tip forces even shallow thrusts to become notably wide.

The weapon often identified with the Greek heroes of antiquity, the leaf-bladed design of the Xiphos stretches back well into the Bronze Age; when the transition to iron blades occurred the Greeks simply kept much of its original form. Though the weapon has a heroic pedigree it was most likely the secondary weapon for most Greek warriors – particularly the Hoplites whose primary weapon was the Dory spear. Should the spear be broken the Hoplite could draw his Xiphos and continue the fight. The Xiphos could also be used by the front ranks of a phalanx should the push-and-shove scrum of a phalanx vs phalanx fight clash too close for the spear to be useful for the ranks in the fore. In such close quarters the Xiphos could find its mark once its wielder found an opening in his opponents defense. 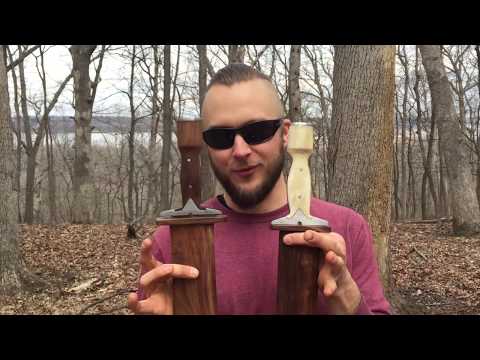